As I've posted before, I grew up living and breathing comic books, and I suppose if you could trace the convergence of my comics love with my rock 'n' roll awakening, it might very well be via this particular artifact: 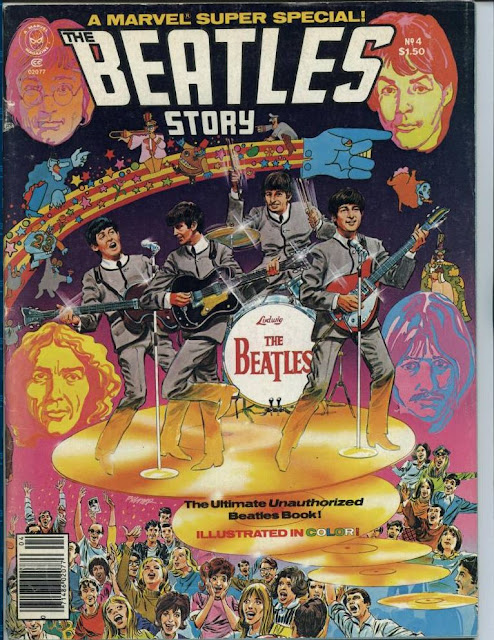 At this point in my life -- 1977-78, when I was 13 -- I bought practically anything that said "Marvel" on the cover, so this was an easy (if expensive) sell. I had about a third of an idea of who the Beatles were. I had seen YELLOW SUBMARINE and I knew all of Paul McCartney's hits (it was the 70s, after all), but that was about it. So this comic book was my first 'real' introduction to the Beatles. (And it probably explains my simple, four-color aesthetic in general.)

Writer David Anthony Kraft was a master of the angsty. matter-of-fact patter that suffused Marvel's superhero comics, so for most of the book the Beatles speak like Reed Richards explaining the Negative Zone -- but only if Reed said "bloody" and "luv" every other word.

Artist George Perez was just starting out on what would be a long, well-respected comics career, but at the beginning his work was a little rough. You could at least tell his Beatles apart, which was something.

It's no easy challenge to tell the story of a band when you can't play their music, and you have to figure out some way to get across the salient facts of the Beatles story using the comics format.  Here's a great page where the Fabs analyze and summarize their career like a group of Avengers each explaining their power. 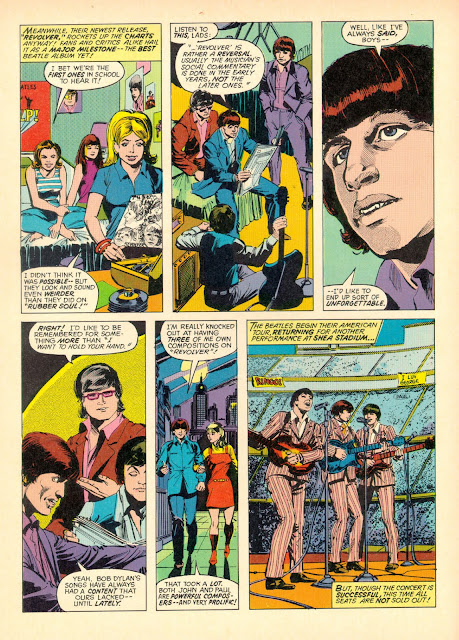 "I'm knocked out at having THREE of me own compositions on "Revolver"! That took a LOT. Both John and Paul are POWERFUL COMPOSERS -- and very PROLIFIC!" (Wow, it's like the writer was right there when George said that!)

I laugh, but I admire the attempt that was made here, as this book was clearly a labor of love for everyone involved. I have no idea whether comics is a suitable format for a rock documentary (probably it isn't), but if you have to do it, THE BEATLES STORY is a half-decent blueprint. I mean hey, it taught me everything I never knew about the band, and helped me set out on a road to enjoying something else in this world besides comic books. There are worse ways to widen your pop culture horizons. Oh, and one more thing: I'm not saying I advocate such things, but if there were a full, free PDF of this comic somewhere out on the web, I bet it would be pretty easy to find. That's all I'm sayin'.