He was a fearless kid in that he would say and do almost anything as long as it got a laugh, or was gave him a moment of enjoyment. He didn't give a shit what anyone thought, but as it turned out pretty near everyone thought he was a hoot. To me, a frail kid who was frightened out of his mind, the heavens could not have supplied a better new friend. He had me over to his house, way over on the other side of town, in one of the older neighborhoods, and when I got there he revealed that he, too read comic books. He also collected TV Guides. And he could draw a great Fred Flintstone. 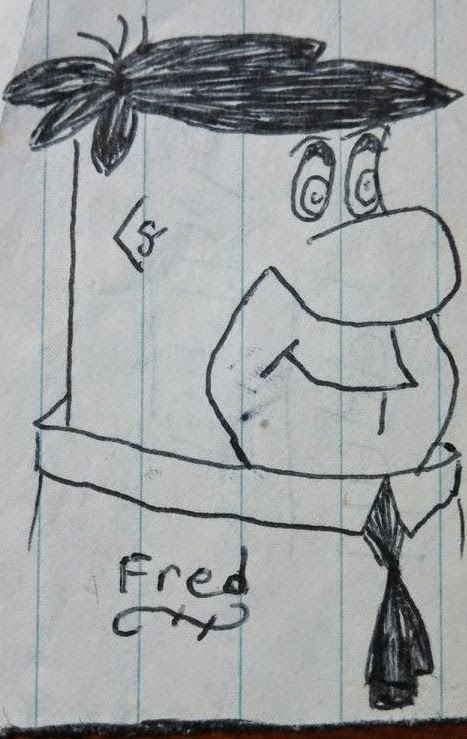 Thus began a really fun friendship. We read and drew comics together. We spent the night at each other's houses. One time in fifth grade my Welsh Corgi Sandy bit Kenny  -- as he put it delicately over the phone to his dad -- "below the belt". (This infamous incident remained a regular, and raucous, topic of conversation for the rest of our friendship.)

And  then he was gone, and I was left to my own devices. Lincoln School was closed, and its students were split among three newer grade schools, depending on where they lived. I didn't like my new school, and I didn't much like my new classmates, who seemed richer and meaner than the kids at Lincoln. In the primitive, pre-internet 1970s, kids who didn't run in the same school or sports circles didn't stay in touch. I missed Kenny terribly. No one I met at my new school seemed to read comic books, or know how to draw Fred Flintsone.

Flash-forward a few years to my earliest days of high school, where I was having big problems with bullies and grades. I was still frail and unathletic. I still read and drew superhero comic books. My social stature in other words had not improved considerably. But now I had a secret weapon: I could muthafrackin' sing, baby. Better than most kids, anyway. What to do about it was another question entirely, though I was a member of the school choir. I took guitar lessons and posed in front of mirrors and dreamed of having my own band. My first attempts at doing so didn't end well, and I was about to settle for being merely a bedroom balladeer, when one day, as I made my way down the halls proudly wearing my Bruce Springsteen 1980-1981 Tour t-shirt, I heard this hilarious singing impression of the Boss echoing against  the lockers: "We went doowwwnnn to the riiiiiiiverrr!"  It was Kenny, his arm around a cute girl. "Hey, I like your shirt. BRUCE."  One thing led to another. How was I doing? Oh wow, I played guitar? Did I want to come over and play in his band? 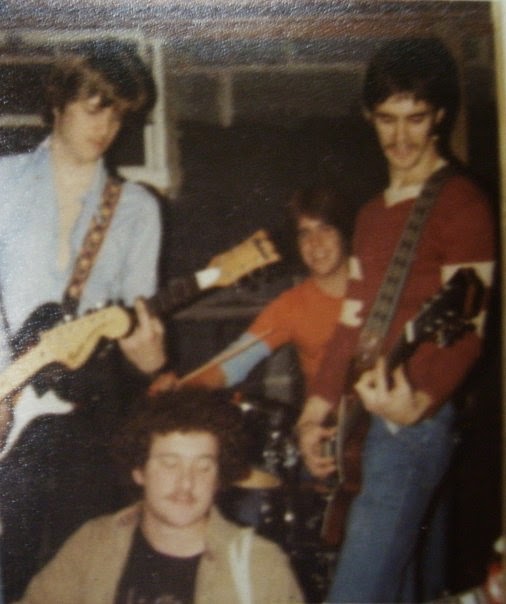 That's Kenny on the drums, Tom up front, Joe on the right.

Here's us -- Pinpoint, the Hot Rods, the Trouble Boys, BC Shakes, whichever lame neighborhood band name we called ourselves at the time -- then, and last year, which happens to be the very last time all of us played together with Kenny.

I will make no claims of greatness for any version of those bands. But I will say that they were a great way to first hone my chops, and most of the time, being in those bands was fun. They mattered to me then and now because Ken was the first peer who thought I had a marvelous voice, and who pushed me to sing more and more, and who onstage would whoop with joy whenever I sang my ass off.  We all have one go around in this life, but there are people who make you go "what if I hadn't met them?" I have no doubt that in some alternate universe where there was no Kenny to love my voice, and me, as much as he did, I would never have had the example of his courage (or crazy bravery, take your pick), and I would never have dared to step on a stage on my own.

And by the way, what all of us loved most about Kenny was his crazy bravery. There was one night at some swim club gig where a middle-age dad tried to bully our teenage band, and as the rest of us froze from the force of this entitled suburban assholeness, Kenny merely declared he'd had enough and was going to pack up and leave. (This all took place before any of us had played a single note.) Asshole Dad was alarmed. He yelled and bullied and ordered. Your band will play, or else! Kenny simply ignored him, because Kenny did not give a shit what he thought. Suburban Dad backed down, and we went on to have a great gig. Years later, at a dodgy club on the Jersey Shore, the owner took one look at our hapless, overly nervous mish-mash of a band and said no way was he going to let us onto his stage. The rest of us were ready to scram, but Kenny wasn't having any of it. C'mon, he cajoled the owner. Let us do one song. The owner frowned. Okay, one song. But if we were anything less than good, he was going to yank us offstage -- by force. We opened with the Blasters "Marie Marie", and the owner was instantly beaming. Turns out he was a big Blasters fan. He backed down, and we went on to have a great gig.

I could go on with Kenny band stories -- one of my favorites was when he decided impulsively to duck-walk, Chuck Berry style, down  the length of a bar that was at that moment occupied by vastly unamused bikers, who Kenny managed somehow to win over. "I was scared to death," he told me just a few months ago about that gig. I would never have guessed. But I am getting sadder thinking about him, because the wounds are still fresh. So I will stop here. Kenny died yesterday, April 28, 2014, after a long, hard fight with cancer. I will miss him. I will miss the smiling kid who befriended me over 40 years ago, when he certainly didn't have to, but I will miss most the guy who loved me and who loved to hear me sing, and who taught me to be just a little bit braver. 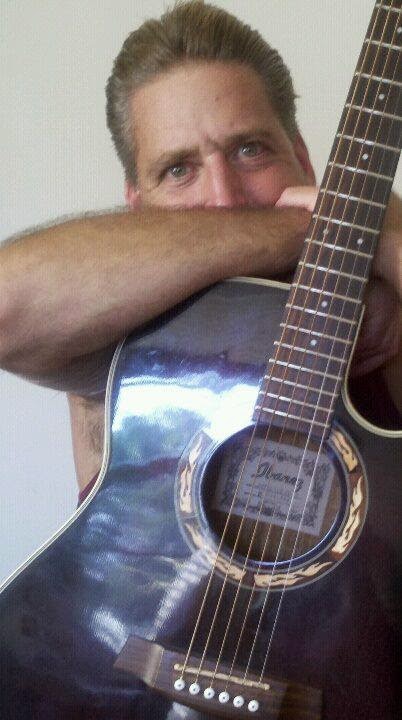