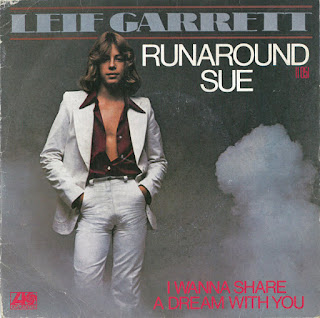 Yeah, I always start out with good intentions on these things.  I'll try to do better.

Leif Garrett, “Runaround Sue,” #13, 1/22/78
My clearest memory of Leif Garrett was the guy who wouldn’t come out to do a signing at an Essex County Korvette’s in 1978 because there were a thousand screaming girls and not enough security – and no, I wasn’t there because I wanted to be (my sister and a friend of hers wanted to go; I hung out in the record section and waited and waited until the thing ended). Not surprisingly, apparently that had happened elsewhere; to my knowledge there were no injuries at the Korvette’s “signing.” Anyway, that’s more interesting than this remake of the classic Dion song, which uses multitracked vocals to cover for Garrett’s thin voice. This was the highest-charting hit from his first album.

Kansas, “Point of Know Return,” #28, 1/22/78
I always thought this song (the first single from the album of the same name) was a much bigger hit – maybe I was listening to too much AOR radio at the time, or perhaps the guys at my school made Kansas seem a more important group than they were. Of course, the album Point of Know Return sold four million copies, so someone was into the band – it just wasn’t me.

Stevie Wonder, “As,” #36, 1/22/78
Fourth and final single from Songs in the Key of Life. Such a great song (although I’d love to hear the single edit; at over seven minutes the album version is a bit much), with a lineup of stars (beside Wonder, the band here included Nathan East on bass and Herbie Hancock on Fender Rhodes). This would be Wonder’s last single (excluding a group effort saluting Berry Gordy Sr., “Pops, We Love You,” which would be released later in 1978) until the autumn of 1979, when Wonder issued Journey Through the Secret Life of Plants.

Donny & Marie Osmond, “You’re My Soul and Inspiration,” #38, 1/22/78
It must be hard to come up with brother-sister duet material (this wasn’t an issue with The Carpenters, since Richard didn’t duet with Karen) that doesn’t sound icky. This one could have been made stronger by making “You” God on the choruses, but it would have required a major rewrite of the verses – and since Marie sings half the verses anyway, you have to wonder who’s walking out on whom. From their album Winning Combination.

Marilyn Scott, “God Only Knows,” #61, 1/22/78
Yes, it’s a remake of the old Beach Boys song, and unfortunately it’s a semi-disco remake, which doesn’t really suit the material. This was Scott’s first single and only one to make the pop charts; she’s primarily a jazz vocalist, and had a few charting songs in that genre on Billboard’s Adult Contemporary chart in the late 1990s and early 2000s. Her latest album is Standard Blue, and she still tours occasionally. Some of her work is on Spotify (but not this song).

Sammy Hagar, “You Make Me Crazy,” #62, 1/22/78
Shockingly mellow song given the title and it’s Hagar at the microphone. That may have been the influence of Capitol Records producer John Carter, who was also working with Bob Welch and The Motels during that time frame – all of whom were in a more pop-rock vein as a result. The former lead singer of hard rock band Montrose, Hagar eventually split with Carter and Capitol, moved to Geffen Records and back into the rock/metal genre, achieving better results.

The Ramones, “Rockaway Beach,” #66, 1/22/78
This would be the highest-charting of the three Ramones singles to make the Billboard Hot 100. Sire Records tried, but the band was lumped in with the burgeoning punk movement – although there were some similarities between The Ramones and The Sex Pistols (who would break up after an ill-fated American tour the same week this song peaked on the charts), The Ramones didn’t do the piercing and safety pin thing. In any case, it’s as catchy as other Ramones songs from the era. From their third LP, Rocket to Russia.

Al Green, “Belle,” #83, 1/22/78
Al Green, on the other hand, was moving in a different direction. Green’s sales had slowly been dropped ever since his peak in the early 1970s (at one point he’d had six straight #1 albums on the R&B chart), but in 1974, he was scalded with hot grits by a lover, who then killed herself. Since that time, he had moved slowly into preaching and religious music (he would make that move full time after his subsequent album, Truth n’ Time. This isn’t a particularly exciting song, but it is moving – I would think it’s partially written for his then-wife, Shirley (who would divorce Green a few years later amid accusations of domestic violence). “Belle” would be Green’s last pop chart hit for 10 years.

Randy Newman, “Short People,” #2, 1/29/78
The parody that most people didn’t understand. Newman had been writing satirical songs for 10 years, but his only hit was a remake of “Mama Told Me Not to Come,” which Newman had written originally for Eric Burdon and The Animals and recorded for his own album 12 Songs, but Three Dog Night would have a big hit with it around the same time of that album’s release. Anyway, for his fifth album Newman wrote a song about prejudice – and a lot of people took it the wrong way (one legislator in Maryland tried to have the song banned). Still, the controversy made it a huge hit, his only top 40 entry (and that includes all of his subsequent movie soundtrack work).

Paul Simon, “Slip Slidin’ Away,” #5, 1/29/78
Simon went through something of a dry patch after Still Crazy After All These Years in 1975 – this and “Stranded in a Limousine” were the only songs he recorded and released between that album and the One-Trick Pony soundtrack in 1980. I’m not sure what was going on (he had gotten divorced from his first wife, Peg, in 1975, and was in a relationship with Carrie Fisher on and off from 1977 until the late 1980s, including being married from 1983 to 1984), but in any case, the formerly fairly prolific Simon definitely took some time away. “Slip Slidin’ Away” has a gospel feel (although the backing vocals are by the country group The Oak Ridge Boys), and is a truthful song about the chances we take and miss in our lives. Originally recorded for Still Crazy After All These Years but not included on that album, the two new songs would be issued on Greatest Hits, Etc., which finished his tenure with Columbia Records.

Styx, “Come Sail Away,” #8, 1/29/78
And then they hit the big time. Styx had been around for years (The Grand Illusion, from which “Come Sail Away” was issued, was their seventh album, but other than the song “Lady,” nothing had really hit big (and Wooden Nickel Records, which issued the band’s first four LPs, collapsed after they left for A&M, which meant their back catalogue wasn’t really kept up to date). But “Come Sail Away” was a monster – bright and cheerful, with great keyboard and guitar solos (from Dennis DeYoung and Tommy Shaw, respectively). The song propelled this album to triple platinum status (it’s still one of their two all-time best sellers, along with Paradise Theater), and made the band a force to be reckoned with on the rock touring circuit for the next five years.

Leo Sayer, “Easy to Love,” #36, 1/29/78
And quickly, America decided they didn’t like Leo Sayer all that much (or else they’d had enough of him). In 1977 he’d had two #1 hits (“When I Need You” and “You Make Me Feel Like Dancing”), plus a top 20 hit in “How Much Love,” but the follow-up, Thunder in My Heart, just didn’t make it, generating two songs that barely made the American top 40 (this song and the title track). Maybe radio programmers decided, with all the Bee Gees music they were playing, that was all the tenor/falsetto singing they needed in their playlists for the time being.

Kenny Rogers, “Sweet Music Man,” #44, 1/29/78
It’s hard to believe this, because Kenny Rogers was so ubiquitous from 1977 to 1984 (25 songs hit the Billboard Hot 100 during that time), but there was a period during the mid-1970s when he couldn’t hit the side of a barn. Kenny Rogers & The First Edition had collapsed gradually over a period of years over what direction they should take, and a TV commercial Rogers did about how to play guitar (“Quick-Pickin’ n’ Fun-Strummin’) brought him some cash when he needed it, but ruined the band’s reputation in the rock world. One of the last songs they made popular on tour was “Sweet Music Man” – which Rogers wrote about himself. The First Edition never recorded the song, but Rogers put it on his third solo LP, Daytime Friends, and it became a minor pop hit as well as a top 10 hit on the country charts. (Coincidentally, Rogers does not play a note of guitar on the album; so much for the quick picking and fun strumming.)

Rose Royce, “Ooh Boy,” #72, 1/29/78
Rose Royce wasn’t a one-hit wonder – the 10-member band managed to put six songs on the pop charts between 1976 and 1979, including a top 10 hit in “I Wanna Get Next to You” – but it must have been very hard for a fairly anonymous group (they didn’t even rate their picture on the front cover of one of their albums until a greatest hits set issued after their commercial fortunes had gone way downhill) to get noticed after their first single was as incandescent as “Car Wash.” Anyway, this midtempo ballad made it to #3 on the soul chart, but obviously didn’t cross over as much as expected.

Kellee Patterson, “If It Don’t Fit, Don’t Force It,” #75, 1/29/78
Kellee Patterson grew up in Gary, Indiana at the same time as the Jacksons, and competed with them at a bunch of talent shows, but she didn’t get the same breaks they did on the charts. Her albums (there appear to have been three) were issued by small labels with limited distribution, and as a result, limited sales. Someone must have liked her, however, as much of her recorded output (including “If It Don’t Fit, Don’t Force It”) is available for download. Side note: she was the first black woman to win Miss Indiana (and thus competed for Miss America), back in 1971 under the name Pat Patterson.
Posted by Curt Alliaume at 3:06 PM