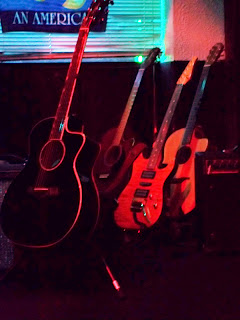 Returned once again tonight to JV's for the bi-weekly Songwriter Showcase hosted by Daryl Jr Cline (who writes and performs some exquisite songs, check him out why doncha). This time, Dave played electric atop my Takaminin', and once again we performed the usual first three tracks from the album. This time however I felt we were really getting somewhere. For one thing, we rehearsed -- always a good plan -- and for another, I am slowly feeling my way back to playing live. I have been away from performing for a good long time, and it shows, but tonight felt good, like a breakthrough had occurred. There's nothing particularly zingy about "South Street" or "One More Day to Rain" that merits their posting this time, but I really felt "Into the Night" soar into an entirely new form. I think it's the best version I've done in nearly thirty years of playing the song. Give it a listen and let me know what you  think.