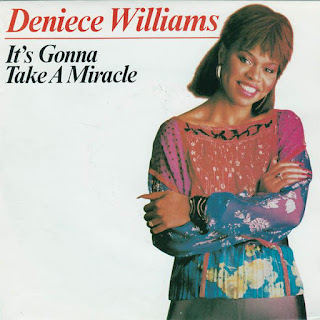 Most people know Deniece Williams from her #1 hit “Let’s Hear It for the Boy,” taken from the (first) Footloose soundtrack. (Her version also appears in the 2011 movie remake, although not on the accompanying soundtrack.) Some might recall her 1978 duet with Johnny Mathis, “Too Much, Too Little, Too Late,” which also hit #1. And a few others remember her voice from the TV series Family Ties; she sings the opening credits theme “Without Us” with Mathis. But this song—which she took to #10 in the spring of 1982—is easily my favorite.

Written by Teddy Randazzo and Bobby Weinstein in 1965, the song was intended for Little Anthony and The Imperials, who had previously made top 20 hits out of their songs “Goin’ Out of My Head” and “I’m on the Outside (Looking In).” But the group was questioning the status of their royalty payments with their record label, so the song went to The Royalettes, who took it to #41 on the Billboard pop chart. It’s a little overproduced on the choruses, but it’s still a lovely song about pain and a relationship that won’t ever come together again. And this is a great period video, which was probably made for a 1960s TV show (local, maybe?); it looks like it was recorded on the Promenade in Brooklyn.

Laura Nyro used the song as the title track for her covers album Gonna Take a Miracle, released in 1971 with Labelle (Patti Labelle, Nona Hendryx, and Sarah Dash) on backing vocals—this version was arranged lightly by producers Kenny Gamble and Leon Huff, the better to showcase the vocals. Later, The Manhattan Transfer revived the song for their 1996 album Tonin’, with Bette Midler on lead vocals; unfortunately Arif Mardin’s arrangements haven’t aged well.

But Williams’ version really is something else. This version was produced by Thom Bell, who had spent the 1970s working with The Stylistics and The Spinners, and thus knew his way around a classic R&B ballad. There are no synthesizers here; Bell uses only a light electric keyboard, otherwise the arrangement hews closely to the original (without turning up the volume on the title lyric like The Royalettes’ record): guitar, piano, bass, drums, and strings, which was exactly the opposite direction most producers were going in the 1980s. And Williams, who spent several years as a backing singer for Stevie Wonder before going on her own, gets to show off her four-octave range years before Mariah Carey thought to do it. It’s a record that is both beautiful and heartbreaking.

I also love the video, which was clearly shot in Manhattan (but where? Soho? Upper West Side? Where were the car dealerships in Manhattan in 1982?). The intro was extended a bit for Williams to chat, using 1980s video technology to make her appear on a billboard. It’s such an irresistible period piece in the days before videos became just as important than the songs themselves (in 1982, there was no chance a female Black R&B singer was going to ever appear on MTV, which had barely started and was aimed squarely at white AOR fans.)

Williams was still occasionally touring before COVID-19, and she’s moved into gospel, winning four Grammys there (she was nominated for Best Female R&B Performance for this song, losing to Jennifer Holliday’s “And I Am Telling You I’m Not Going” from the Broadway version of Dreamgirls). Give this a spin on Spotify when you’re making a mix of late-night ballads. It’s on her 1982 studio album Niecy and both of her greatest hits albums with Columbia Records, The Essential Deniece Williams and The Best of Deniece Williams: Gonna Take a Miracle.

(Crossposted from Yesterday, Today, and Tomorrow.)
Posted by Curt Alliaume at 9:15 PM