Songs You’ll Only Listen to Once: Tom Clay, “Whatever Happened to Love” 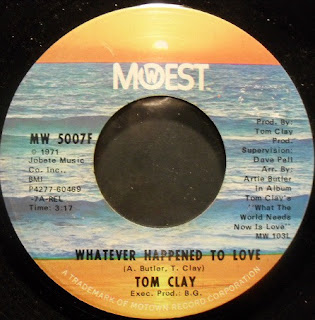 If someone starts talking about Berry Gordy’s genius for picking hits, play them this one.

Tom Clay was a disk jockey in the 1950s and 1960s who worked in cities all around the northeast and Midwest (New York, Buffalo, Cincinnati), but he was best known in Detroit (and Windsor, Ontario, which is just across the Detroit River; in that era people could walk back and forth easily via footbridge). Clay was dropped from stations in the area twice for embarrassing reasons: when at WJBK in 1959 he got caught in a payola scandal, and in 1964, CKLW dropped him after he created the “International Beatle Booster Booby Club” (fans would send him a dollar and get a membership card, but only a select few got a 45 of Clay interviewing the band). Not sure what Motown saw in this guy, but they released a couple of singles and an album under his name in the early 1970s. 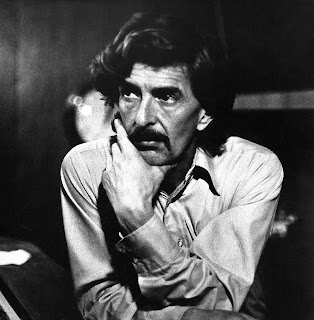 I have to say serious spoken word records were a minor cottage industry in this era—from Victor Lundberg’s top 10 hit “An Open Letter to My Teenage Son” in 1967 (“If you decide to burn your draft card, then burn your birth certificate at the same time. From that moment on, I have no son”) to “The Americans,” released by Gordon Sinclair, Scott MacGregor, and Tex Ritter in 1973 (Sinclair wrote it, MacGregor had the hit; Ritter’s version perplexes me given the song is written from a Canadian's perspective). Anyway, Clay had a #8 hit on MoWest in the summer of 1971 with a medley of “What the World Needs Now/Abraham, Martin & John,” with him interviewing children about bigotry and prejudice, and audio reports (probably mostly recreated; I recognize Clay’s voice on a few) of the assassinations of John Kennedy, Martin Luther King Jr., and Robert Kennedy, all with the two title songs playing in the background. I suspect it got lots of airplay on a few smaller stations and then everybody played it for two weeks, then that was it—I was going to write “I sure don’t remember hearing it on WABC in New York,” but I checked their surveys, and sure enough, the song peaked at #4. (In my defense, I was eight years old at the time.)

Anyway, that was enough for Motown to issue a second single, cowritten by Clay and legendary arranger Artie Butler (who notably does not list Clay among the hundreds of artists he’s worked with on his website). It’s one of those “gee, the old days were so much better than now” songs that have never fallen out of favor—Motown was still in that game over a decade later, when Charlene (“I’ve Never Been to Me”) and Stevie Wonder combined to record “Used to Be.” I don’t remember 75 percent of the things he recalls (maybe there are some septuagenarians reading this who can correct me). And in terms of quality within the genre, the song was completely eclipsed by Jr. Walker & The All Stars’ “Way Back Home,” also released by Motown around the same time.

So the song flopped, Clay went back to DJing and voiceover work (he died in 1995), and the singles and parent album What the World Needs Now is long out of print (only the “What the World Needs Now/Abraham, Martin & John” medley is available on Spotify). Motown included both songs on their Complete Motown Singles sets from 1971, which is where I heard this song (borrowed it from my local public library). So when you’re tempted to say, “Everything sucks now,” remember people have always felt that way.

(Crossposted from my Yesterday, Today, and Tomorrow blog.)

Posted by Curt Alliaume at 5:10 PM