Get Me Rewrite! Part 1 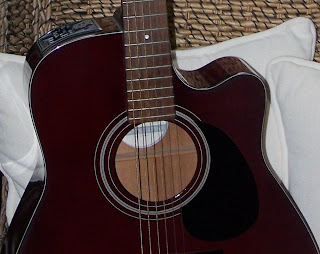 As promised, here is the first revision of "One More Day to Rain". I took the song over to David McKittrick's house on Sunday night and we hammered out a new draft of the song. Here's a breakdown of the changes we made:

We also discussed the second song (which I continue to call "Track 1" because it was the first scratch of a song I recorded for this project). What you will hear is the basic melody and chord progression, with made-up placeholder singing where the final lyrics will be. What I have in mind for this song is modestly epic, musically speaking. Each verse will play off a three-note staccato progression, with the vocals taking one path, horns on another, and other instruments including strings layering and varying throughout. Dave and I agreed that it would be an in-studio art project -- once all the various parts are recorded, we would cut and paste and insert them all over the song, wherever they felt right. I hope that all makes sense -- I'm extremely excited by the possibilities for this song. I just have to write some good lyrics to match.

So... thoughts, ideas, suggestions? Again, I want you to think of this project as fully collaborative, which means all ideas are open to consideration, and you will be given co-writer credit on any song in which your ideas are applied. (And if I don't use your ideas, don't take it personally.) I don't for a moment believe everything I'm doing here can't use improvement or serious critique, so feel free to speak up and opine as much as you wish.

My next step is to work up Song Number Three, so keep watching this space.
Posted by John E. Williams at 4:52 PM