Shadows on the Wall, Noises Down the Hall 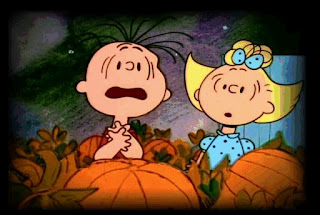 It's Halloween, and theoretically I should post if anything some fun musical thing to do with ghosts and goblins and witches and Great Pumpkins or whatever, but beside the fact everyone and their brother will already be doing that, and probably a better job, it's also true that my heart is simply not in it this 31 October. The only reason I can think of for that is that these days I can't find anything particularly fun about fear. Of course, your mileage may vary.

I think a lot about what I am afraid of, and why, and I have in many ways come to the conclusion that my fears are really just old, bad habits. For instance: I still sometimes fear checking the mailbox because back when I was single and broke and in horrific debt, checking the mailbox meant seriously bad news. (You should have seen how overstuffed the thing would get after weeks of scaredy-cat procrastination. Wotta bonehead.) Other fears however are very real, especially the ones having to do with keeping a job and keeping health insurance. (At the moment, I have the former but not the latter.) And I feel a great deal of genuine fear knowing we may soon face a brand of leadership that believes some people matter, and some people don't, and that cutting the second group off at the knees is not just moral and right but also brave and true. And as always, I fear losing those closest to me, whether through death or desertion. All of this is far more effectively scary than the zombies on WALKING DEAD (who can at least be stopped by a bullet in the noggin).

Not surprisingly, the most effective ally I have against these fears (besides prayer, which is none of your business and we'll not discuss that here) is rock 'n' roll music. For my money, the best songs to fight fear are songs about fear, which I bet you saw coming. They don't always vanquish fear, and some aren't the least bit comforting, because they aren't meant to be, but they manifest and express a shared fear in a way no other manner of expression can -- including prayer. So here is a list of some of my favorite songs about fear. Consider them little flickering candles in the dark. Sometimes that's all you have. And if you haven't heard all or some of them, I hope they fortify you the way they have me.

Oh, and feel free to add your own.