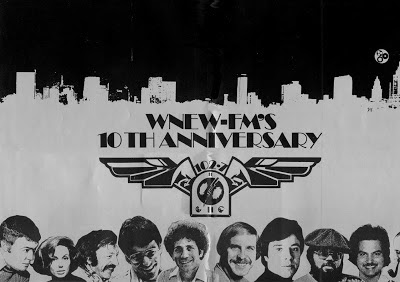 In my school back in Jersey, during the 70s, when it came to radio stations you were pretty much either an WNEW fan or a WPLJ fan. I was the former, because WNEW played the first airings I ever heard of songs by Elvis Costello, the Clash, Graham Parker, Ian Hunter, the Ramones, the Good Rats, the Boomtown Rats, Greg Kihn, and so many other artists who cured me of my then-diet of not much more than Billy Joel and Beatles. WPLJ acted as if none of those artists existed. They stuck with the usual mainstream basics of what eventually became known as 'Classic Rock'. Sure, WNEW played that stuff, too, and plenty of it -- just not as often, and they stuck in the hip 'n' cool stuff where they could. Also, whereas WPLJ had popular, sexy, throaty hottie Carole Miller, those of us with a certain appreciation of smart women preferred Meg Griffin (who, like many of her compeers, is now working on satellite radio). And most importantly to me personally, it's the station where I always first heard the new Springsteen single, and where I first learned of John Lennon's death, no small events they.

WNEW was just a radio station, and probably not really even a very good radio station (by the time I left Jersey it had sunk into a deep and lousy shitty state), but it left its mark on my musical soul just the same.