Morgan Henry is My Hero

The first fully-completed song (in demo form) for this project was "One More Day to Rain", which had potential but suffered from a lyric cadence that was, as Dave pointed out, too fast and left the song with little room to breathe (details at the link, if you're curious).  So I re-worked it into this version, which to be honest I had completely forgotten about until I started preparing this post. Version 2 is clearly an attempt to address the existing problems, but it goes off the tracks by altering one of the better hooks of the original. It's no wonder I forgot about it.

My next attempt at the song was more recent, and I took a far simpler and more direct approach this time, cutting out some lyrics and thereby reducing the number of pell-mell syllables tumbling out of my mouth while leaving the melodic aspects intact. It worked pretty well, and smoothed out the song quite nicely. I e-mailed the rough demo track to the guys in the band to learn for that week's rehearsal, and this is where Morgan Henry became my hero. 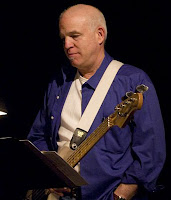 Morgan had by now switched from bass to guitar, and at practice he asked me quite respectfully -- even shyly -- if it was okay by me that he had written some guitar parts for the song. This is a bit like a gifted auto mechanic asking if it was okay that he replaced the engine in my '99 Saturn with that of a Porsche, so of course I replied that it was more than okay by me, and I couldn't wait to hear what he did.

What he did was transform the song from a bangety (yes, 'bangety') acoustic folky-like song into a solid power pop single, suffusing the song with a sense of joy and augmenting the hook with a lick so tasty you could sell it to Ben and Jerry's.  The demo is pretty rough, but you can hear it well enough to see what I'm talking about. I am so hyped up to get into the studio and work this song, not to mention present it to a live audience somewhere down the road. Morgan will probably smile and shrug at all this fuss, but he gave me a gift that means the world to me. Thanks, buddy.

One More Day to Rain (Morgan Henry version)
Posted by John E. Williams at 9:28 AM