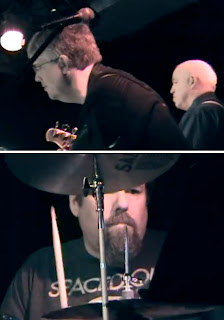 On the left there is Dave McKittrick, Morgan Henry, and Dan Fitzgerald, the members of the band I performed with at the Jammin' Java birthday show. I have never clicked with a band as fast or as well as I did with these guys, who in addition to being superb musicians are highly terrific human beings.  A few months after the JJ gig, we were sitting in a small club together over beers and Thai food, and someone said "Hey, why aren't we a band?"  Which was a good question. So we have begun rehearsing together, with an eye on playing out. More on that as it develops.

Herewith is the live version of "South Street" that we played that day. We have since rehearsed it at band practice, trying to refine it and get to the heart of what the song should sound like and where it should go from here. What we discovered was something unexpected, and I'll share that tomorrow.