My personal heyday as a comic book fan was the 1970s, which was a weird time for a lot of things, but most especially pop culture. (Ignore internet memes and nostalgia freaks: every single 1970s TV show sucked.) Every week I would relentlessly blow my lunch money on comic books at a little store called Center Stationers, and for me comics were serious business. I'm not kidding around when I say that the fate of the Fantastic Four was more important to me than memorizing the periodic table. (And hey, it still is.) Imagine my bafflement when in 1975 ads for this weird Spider-Man "rock" album suddenly popped up in my favorite books. What fresh hell was this? 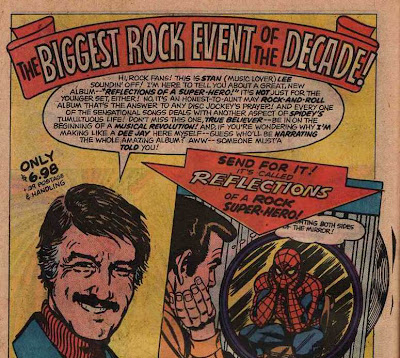 I doubt I ever had $6.98 to my name (I blew it all on comic books) but I still would not have spent it on this non-canon blasphemy. So I ignored it, and eventually it went away. Last night, through the magic of YouTube, I finally gave the songs a listen. All I can say is, if any rock album could perfectly encapsulate the pure fake-funk-jazz cheesiness of 70s "rock", Reflections of a Rock Hero does the job. Give a listen, and shake thy booty, True Believer!

(Highlights after the jump.)


"Dr. Octopus" (bonus: this clip was uploaded by the performer who played Doc Ock)


They say the band includes members of Crack the Sky and some work by David Sanborn, but they lie. This is the real band.