It's a good bet that the first musical instrument I ever heard  up close was the accordion. My Dad had learned to play it during his childhood, and he brought it out every so often to amuse his five kids.  I loved when he played, because I loved how warm the accordion sounded, and I loved the strange and exotic songs he'd wheeze out, most of which were polkas and German folk songs. But interestingly, it was not me but my sister Mary Ann who decided to follow in Dad's footsteps, at least for awhile. I wish she had kept at it.

The older us kids got, the more Dad's accordion became a running gag. Every time one of us had a recital, or a play, or some event where we were going to perform or be recognized, Dad would jokingly threaten that at some point during the proceedings, an announcement would come over the PA that a 'special guest' would give an accordion performance. My sisters were duly (and humorously) horrified, and I kind of wished he'd do it, just once. When this classic cartoon first appeared, you can bet that we couldn't share it with Dad fast enough. 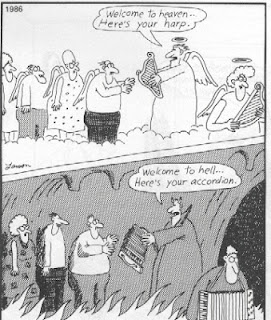 But I think the jokes and teasing eventually took their toll, because by the time grandchildren had entered the picture my dad had sold off his accordion, and that was that. Over the years I have asked him if he would ever want to take up the instrument again, and once we even offered to buy him a concertina, but he just isn't interested. I think a part of him is sad about it, maybe, and wishes perhaps that his children hadn't given him such a hard time about it, which I can completely understand. (On the other hand, he may have simply decided he hated the dumb thing. It is tough to read my pop sometimes.)

Either way, the absence of my dad's accordion is a bit sad for me, because I miss his playing and whenever I hear an accordion, especially in a pop song, my first thought is of Dad sitting in the living room in a suit and tie, playing something warm and funny and totally corny. I wouldn't mind hearing him play it just one more time, and maybe even jam with him a little. (see photo above) In the meantime, here's a list of songs that evoke to one degree or another those warm, fun, long-lost living room performances. Bravo, Dad, bravo.

One thing about this list -- I avoided stuff like zydeco or cajun songs, not because I don't care for them but because that isn't the style my dad used to play. These songs resemble the same warm, kindly feel of his accordion, which isn't something I can readily explain or illustrate. But that should answer any questions about why certain songs or genres have not been included. And, no, I am not including "Squeezebox".

SPECIAL ADDED BONUS. "The Injun Song" - featured prominently in my sister's lesson book, and in her repertoire. Dumbest and funniest song she has ever heard, let along played, and oh, not the least bit offensive nor racist, heck no.

John:  We just spent two hours or so listenting to Bruce on your link!    We especially enjoyed the Seeger Sessions Band! What a treat! Thank you so much!

Your thoughts on my accordion playing were very moving;  I treasure them!

We're going to keep the link up so we can hear some more!

From what I can glean, I sent my parents on a fun-filled Springsteen YouTube fest. Which is great!

Still don't know why he abandoned the accordion,  though.