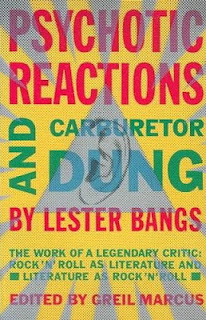 It took me nearly twenty years, but today I finally replaced my long-lost copy of Psychotic Reactions and Carburetor Dung, the seminal, posthumous 1987 collection of the work of Lester Bangs, the volatile, brilliant, Detroit-born 1970s rock critic. Lester wrote for and practically co-founded CREEM, where he not only set a brash and funny standard for the then-unheard of field of rock writing but was also an early champion of influential performers like Iggy and the Stooges, the MC5, and the Ramones. In New York, Lester became a mainstay at CBGBs and began chronicling the rise and fall of punk rock (a term he created, by the way) as well as carrying on an epic and funny feud with Lou Reed. And not for a minute did Lester take anything, least of all himself, very seriously.

Except, of course, his writing. Bangs was a howlingly great writer -- not just funny, not just influential, not just outrageous, though he was all of those things -- but great, in that his work continues to be timely and filled with profound, funny, and touching truths. Lester was known for writing scathing and hilariously mean pieces about artists he despised, like Chicago and James Taylor, and for going nearly overboard for artists he loved, such as the aforementioned Iggy and MC5, and his addiction to speed and booze gave his work a frenetic quality that rivaled that of Hunter S. Thompson. But like Thompson, Bangs knew how to write, and he wrote exquisitely. Some of his most powerful work is found in more serious pieces, like "The White Noise Supremacists", his examination of racism in the New York punk scene, and "Peter Laughner is Dead", about the founder of Rocket From the Tombs (which became Pere Ubu), whose death from drugs Lester painfully chronicled, foreshadowing his own demise. But perhaps the most famous and most beautiful article Lester Bangs ever wrote was his touching but unsentimental paean to Elvis, shortly after Presley's death. He ends the piece thusly:


If love truly is going out of fashion forever, which I do not believe, then along with our nurtured indifference to each other will be an even more contemptuous indifference to each others' objects of reverence. I thought it was Iggy Stooge, you thought it was Joni Mitchell or whoever else seemed to speak for your own private, entirely circumscribed situation's many pains and few ecstasies. We will continue to fragment in this manner, because solipsism holds all the cards at present; it is a king whose domain engulfs even Elvis's. But I can guarantee you one thing: we will never again agree on anything as we agreed on Elvis. So I won't bother saying good-bye to his corpse. I will say good-bye to you.