Pawing Through the Dross of the 1980s: Punk Rockers in Mainstream Movies 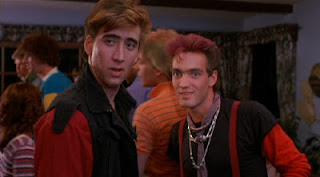 The early 80s were for some a time of scavenger hunting. Us hip wannabes liked our music on the outer edge of popular culture and ahead of the curve, which really meant we just happened to be exposed to soon-to-be popular stuff before most everyone else. In the meantime, a steady diet of awful MTV New Wave and Corporate Rock was driving us crazy, so all us hip wannabes would look desperately to movies and TV shows for some acknowledgment of our weirdo demographic. It was kind of fun, actually -- you'd go to a lame teen comedy or horror movie and lo and behold, there was an appearance by a song or a band that you thought only you and maybe three of your friends had ever heard of. Here then is a list of semi-obscure punk songs and performers that popped up unexpectedly in popular places.

1. The Plimsouls, "Oldest Story in the World/A Million Miles Away", Valley Girl  (1983) A smarter film than it had a right to be, but real L.A. punks from that period would have kicked Nicholas Cage's ass.
2. The Specials, "Little Bitch", Sixteen Candles  (1984) There's a great scene of Joan Cusack wearing a neck brace and dancing to this song with another girl, but of course I can't find a clip of it on YouTube. Jerks.
3. Oingo Boingo, "Dead Man's Party", Back to School (1986) Only kind of counts because most of us liked OB for about three minutes before they grew tiresome. (There was actually a law that said Oingo Boingo had to have at least one song on every soundtrack of every teen comedy made during the 1980s. You can look it up.)
4. The Clash, The King of Comedy (1983)The Clash were the Holy Grail. Before Combat Rock you rarely saw them on TV  -- Tom Snyder, of course, and on local news stations when they played their legendary Bonds shows. And as we know, Combat Rock and its ensuing success were a classic case of being careful what you wish for. During that in-between time, us guys heard that the great Martin Scorsese had declared himself a Clash fan, which was too awesome for words, and that he was going to feature the Clash in his next film, The King of Comedy, which was too awesome to even be too awesome for words. When the movie was finally released, all we got was about a .03 second glimpse of Strummer and the boys, plus a longer shot of what appears to be their pal Ray Lowry, portraying "street scum". Well, back then ya took what you could get.
5. Flea, Back to the Future and its sequels (1985-1989) "What's samatta? Chicken?!?"
6. Circle Jerks, Repo Man (1984) A bit of a cheat, since this wasn't exactly the feel-good family mainstream comedy hit of the year. Still, it was a real movie, shown in local theaters right alongside stuff like Beverly Hills Cop, so it counts. Added bonuses are that the film was produced by Monkee Mike Nesmith, who makes a cameo as a rabbi, and features Jimmy Buffett (!) as "Additional Blond Agent".
7. Nick Cave and the Bad Seeds, "From Her to Enternity", Wings of Desire  (1987) More than a mere cameo, as Cave and the Seeds don't just pop up in the background playing a house band or something. Their scene is integral to the film's storytelling, and the band performs the entire song.
8. Lou Reed, One Trick Pony (1980) Lou gleefully plays the world's biggest a-hole record producer.
9. Stan Ridgway, "Bing Can't Walk", Slam Dance (1987) I have never seen this film, but I probably should -- it's a murder mystery about a cartoonist, it features Tom (Mozart) Hulce and X's John Doe (as a cop), and has stuff about punk rockers (I guess). I'll look it up and review it some time.
10. The Ramones, Rock 'n' Roll High School  (1979) A total cheat, but it counts because the Ramones show only up a few times in what was otherwise a by-the-numbers almost-80s teen comedy. Also, it's great.