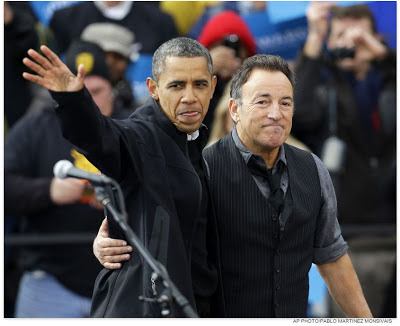 In my early years as a Springsteen fan, say 1976 onward, I remember wondering what Bruce sounded like when he talked, or looked like when he moved, because I was too young to see him in concert, and the odds of seeing him on TV were pretty low. So the massive bandanna/muscle shirt era was a big shock to me, and took some getting used to (and getting over). We create a sometimes unfortunate idea that performers we love somehow 'belong' to us, and it's hard to let them go into the arms of a larger, more lucrative audience. You have a feeling of being left behind, which sounds absurd and kind of dopey, and of course it is. But that doesn't mean the feelings aren't real, or that they don't matter.

So here was Bruce Springsteen today, the day before the worst and most rotten election in my memory, standing with his arm around the President of the United States, not to mention the first black President of the United States, and regardless of politics, this was to me a great thing. It is fitting and proper that Bruce is saying the things he said today, not just to help get a decent president re-elected but to state once again, eloquently and simply, the fundamental beliefs that run through his work, the beliefs we all share about hope and dreams and honor and fairness. Springsteen is saying that he does belong to us, and that we belong to each other, and if he had his way, nobody'd get left behind.