ADDENDUM: Rob Flowers in the Attic 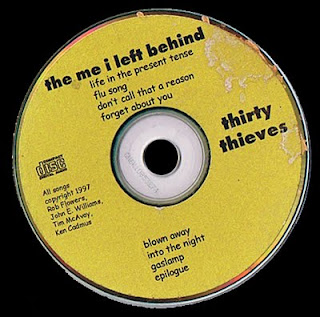 A few years before we met, Rob spent a day sick as a dog with the flu, so of course instead of resting he decided to write songs all day. One of the rough demos was the seed for the song attached below, in which Rob sang of clock faces and lateness, and god only knows what he was trying to get at. I took the song home and re-conceived it as a song about love and fear and confusion, which were the three main staples of my life for years (and still are, sometimes). Something in Rob's voice denoted a lost soul, and the way he sang it sounded as if he was about to break down any moment, so I wrote the new verses with that in mind. The result was a pretty damn good song (if I say so myself) one that Rob carried on to his next band, The Plunge, who blew away our version of the song. Not to mention our band, period, ha ha. Ha.

I am still rather proud of one phrase I wrote for this track -- which we nicknamed "The Flu Song" until we came up with something better, which we never did -- if only because for me it summed up how much my life had changed for the better since leaving New Jersey for good.


I have lost myself, I've lost myself
And I don't know why
I have overslept, I've overstepped
The me I left behind