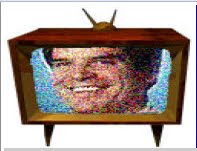 "TV John" Langworthy is hard to explain. And come to think of it, he's hard to describe. Like Disney World, TV John must be fully experienced in order to be fully appreciated. Click on his link and watch the YouTube video below or at his website and you'll get an idea what he's all about. That doesn't mean he'll be any easier to explain.

Right across the river from Washington, D.C. is a section of Arlington called Rosslyn, and on the corner of 19th and N. Lynn Street was once a restaurant and bar known as the Tex Mex Grille. It was here that I played my first non-Jersey open mike, which led to my first non-Jersey regular gigs, all thanks to TV John Langworthy, who ran the open mikes and booked the performers.

Ask TV John what "TV" stood for and he'd smile broadly and say something like "Total Victory!" You'd get a different answer 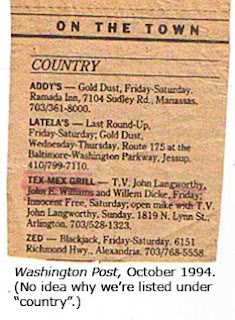 every time, so you'd stop asking. You could never really tell when -- or if -- the guy was putting you on. When he hosted my old band ('Thirty Thieves') he'd make ostensibly clever remarks all night about Ali Baba, even though that wasn't the source of our name. He liked to introduce each act (usually two a night) with ludicrously lengthy monologues that failed to have anything to do with the performer in question. And when the bar didn't draw a decent crowd (or any crowd at all, not unusual for Rosslyn) he'd sit down with you at 2 a.m. and try to make a deal that consisted of you foregoing any sort of payment whatsoever for the grueling four hours you just put in.

The Tex-Mex Grille is long gone, the very building it was in demolished and replaced. It was home base for a lot of us, a way to make a few bucks and play a low-pressure gig and blow off some steam. In the summer we'd perform on the outdoor patio, the only drawback being that occasionally you'd have aircraft coming in for a landing at nearby National Airport and the screaming engines would sorta drown you out. But you could also play as loud as you wanted right back (at least outdoors) since Rosslyn basically shut down on weekends, and for a time it was the closest thing I ever had to a Stone Pony-type club of my own. And we all had TV John, who threatened to drive us all nuts.

He was a legendary character, and every musical history worth a damn is peopled with legendary characters, so that's at least one I am proud to lay claim to. And for all his madhouse kookiness, TV John did me several solids, such as taping our gigs (which I still have and will share with you in the future) and lending me PA equipment because I didn't own my own. And really, how can you not love a guy who gets up in public on a regular basis and so joyfully does stuff like this: