And All Blown Away 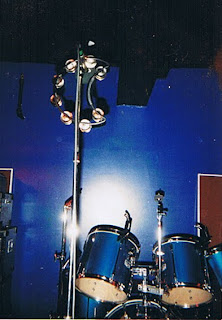 This is a photo I took in the mid 90s of the main stage at a long-gone club in Fairfax, VA called Planet Nova, and this entry is about a guy I often shared that stage with.

The phrase titling this entry is one that follows the name of this blog, in a song I co-wrote called "Blown Away". The cat who co-wrote, produced, and played guitar on the song is a guy named Rob Flowers.

I met Rob in 1995, shortly after moving to Northern Virginia, when I was lonely for a band and answered an ad in a local music rag looking for a lead singer. For the next three years I sang lead and Rob played lead for what became known as Thirty Thieves, a really terrible name for what was in fact a pretty terrific band -- at least, in most respects. Rob and I were in our early 30s, whereas the remaining members were at least ten years older, and this caused some unavoidable creative differences, such as my reluctance to mix Gin Blossoms and Paul Westerberg songs with fairly incongruous ones like "The Wind Cries Mary" and "You Really Got Me" (or was it "All Day and All of the Night"?). But musically, we rocked our asses off, and I was really proud to be upfront in what was the loudest and tightest group I'd ever played with.

Like most bands, this one was destined to break up after a few years, but before we did Rob and I decided to write a batch of songs and record them with the band, a spontaneous idea not unlike the one that originated this blog. And so we did, and while I think there are severe weaknesses to the songs -- for which I blame myself -- the performances are sheer powerhouse and give a pretty good idea what we were like live, which was tight and loud and businesslike. All of this is due mostly to Mr. Flowers, who kept his head when no one else did and whose intense meticulousness (which I loved to ridicule in every other area of his life) made for good songs and great performances and an efficiently-run organization. So when Rob found another band and another lead singer, I cannot lie and say it didn't hurt. It was not unlike watching your significant other go off with another. And just like that sort of relationship, Rob and I saw less and less of each other, though we stayed close and checked in often and were even groomsmen in each other's wedding. Still, something got lost there that could have and maybe should have continued, but life is like that, as we all well know.

Rob has kept busy musically over the years; you can find him these days playing with and producing a band called Overdrive Superthruster, and a few years back he recorded a nifty solo album entitled Memory Random (available on ITunes), and if time and work permit he may very well contribute to this crazy project. Even if he doesn't, he deserves very special mention, especially if I'm gonna dredge up all this stuff from my musical past. I learned a lot from this gentle, funny, talented fellow, and I am glad he came along when he did.

Blown Away
Posted by John E. Williams at 8:58 PM