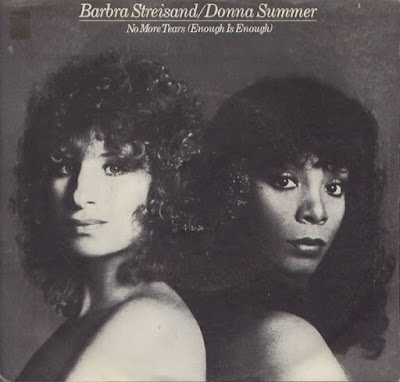 As we got toward the end of the year, this was a week with one monster hit and a few other memorable minor tunes.

Mammoth, huge hit that was one of pop’s first superstar duets that reached across record labels (Streisand had recorded the #1 duet “You Don’t Bring Me Flowers” with Neil Diamond the previous year, but both recorded for Columbia; Summer was on Casablanca Records.) It was truly a meeting of the minds: Streisand and Summer between them had had the #1 single for nearly 25 percent of the previous 12 months; the song was written by Bruce Roberts and Paul Jabara (who had written for both of them in the past) and was coproduced by Gary Klein (Streisand’s primary producer) and Giorgio Moroder (Summer’s main producer), as well as being released on both Columbia and Casablanca (in the United States, Columbia had the 7” single while Casablanca released the 12” disco version). Most notable for proving Summer was just about Streisand’s equal vocally; it was a little shocking this didn’t last at #1 longer than two weeks—perhaps proof that the fall of 1979 was stuffed to the brim with superstar acts.

Wood has been in the music business for years as a vocalist (starting with Frank Zappa) and a songwriter (her song “Fallen” appeared on the Pretty Woman soundtrack, which probably paid well), but this is her one and only top 40 hit. And it’s a mix of styles from the era: creamy soft rock with a disco instrumental break, featuring top-flight studio musicians (the album credits include Bill Payne and Fred Tackett from Little Feat, Jeff Porcaro, Steve Lukather, and David Hungate from Toto, Jim Keltner, Jay Graydon, and Ronnie Montrose). And, of course, what song from this era would be complete without Michael McDonald on harmony vocals?

This song, from The Muppet Movie, was the second and (to my knowledge) final Hot 100 appearance by a Muppet (Ernie’s “Rubber Duckie” peaked at #16 in 1970). Used at the start of the movie when Kermit is introduced singing it in the swamp, it set the tone for a surprising hit film. The song was nominated for an Oscar for Best Original Song, losing to “It Goes Like It Goes,” as sung by Jennifer Warnes on the Norma Rae soundtrack. With hindsight, that looks like a really bad decision, as “Rainbow Connection” has been covered dozens of times, by Kenny Loggins, Sarah MacLachlan, Willie Nelson, Jane Monheit, Weezer, Gwen Stefani, and many others. It also holds a special place in my heart: my wife and I used to sing it to our newborn son as a lullaby.

This was the first single from the band’s Dream Police album, released on the heels of their breakthrough with Cheap Trick at Budokan. The album charted higher than any studio album they’d had before or since and went platinum (triple platinum in Canada), but it was still seen as something of a disappointment (Budokan went triple platinum in the States). In retrospect, Epic Records might have been better off holding the album until the first or second quarter of 1980 to avoid competition with all the other big acts who released long-awaited albums around that time, but they didn’t. Anyway, this is a solid rocker with full orchestration and a raging synth line. Unfortunately, this original video has a way-too-long spoken intro.

Second single from Candy-O, and it had to be a disappointment to the band and Elektra Records that this didn’t crack the top 40. It’s got the typical Cars sound from that era; it’s less danceable than “Let’s Go,” but so was “Good Times Roll” (of course, that peaked at #41 too). The only thing I can think of is the rock market was packed in November and AOR and Top 40 programmers were leaning toward newly-released music instead of material from a five-month old album. Benjamin Orr has lead vocals on this song (as he did on “Let’s Go”).

And here’s another possibility: this song split the market. Written by Ric Ocasek of The Cars, and with Ocasek and Benjamin Orr playing on the song as well, it would be easy to mistake this song for something by that band instead. (Especially since Ocasek incorporated some of the rhythms of the song into “You Might Think” a few years later.) Lloyd was best known as the lead singer of Stories, which had a #1 hit with a cover of Hot Chocolate’s “Brother Louie” in 1973. Lloyd sang the lead for the remake, used as the main theme for Louis C.K.’s FX series Louie from 2010 to 2015 (which is now out of circulation, or should be).

You could still lead people to the dance floor in late 1979, but you couldn’t make them think. From the band’s 1979 album Fear of Music, this dance track, per David Bowman’s book This Must Be the Place: The Adventures of Talking Heads in the Twentieth Century, describes “a Walker Percy-ish post-apocalyptic landscape where a revolutionary hides out in a deserted cemetery, surviving on peanut butter. ‘I wrote this in my loft on Seventh and Avenue A,’ David later said, ‘I was thinking about Baader-Meinhof. Patty Hearst. Tompkins Square. This a song about living in Alphabet City.’” Byrne has also noted the irony of the line “This ain’t no disco” sticking with listeners, making the band part of the antidisco movement at the time—as any Talking Heads fan knows now, dance music is a main component of their work.

Unfortunately, you could see this one coming a mile away—Ward’s second single wasn’t nearly as popular as “Ring My Bell.” This was the first single from her second album, Sweet Surrender, which like the first was released on Juana Records (a subsidiary of Florida-based T.K. Records), and was also written and produced by Frederick Knight. But the song wasn’t nearly as interesting, and pure disco was losing steam in the pop market by the end of 1979. Ward still performs occasionally, but never released another album in the United States after Sweet Surrender.

Crossposted from Yesterday, Today, and Tomorrow.

Posted by Curt Alliaume at 5:29 PM